Joe Lavinger from Bethlehem, PA was born on Wednesday, July 18th, 1923.  Some of the things that were happening at that time changed our lives forever.

Today, we can’t imagine life without all the inventions that have happened during Joe’s lifetime.  Joe made it through, as a teen, he was drafted into the Navy to join the fight in WWII.  He served on the USS Steady which was a minesweeper.  Maybe that’s when he developed his comedy, to help calm the nerves of his shipmates. 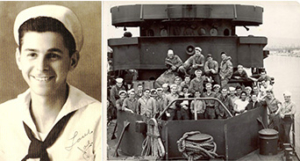 After the War, he found himself in entertainment as a singer, musician, comedian, and talent agent.

Joe had a dance band for 55 years in the Columbus area.  I think it’s the longest running band in Columbus.  As a talent agent, he was booking shows for acts such as the Glen Miller Band, Tommy Dorsey Band, as well as comedians such as Jackie Gleason and others.

His four-piece band – Tune Timers – has performed in all kinds of venues from nursing homes to VFW halls.  It was at a VFW hall where he acquired the nickname, “Crazy Joe” because of his antics on stage. Joe said that “A guy came up and asked what the name of the band was, and I told him, Tune Timers, and he said, no, it should be ‘Crazy Joe and the Tune Timers,’ and it stuck.” 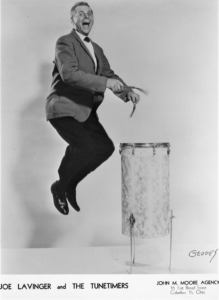 He described one of his gags while performing ‘When the Saints go Marching In.”

“We would march out of the room and go into the ladies’ room, and I’d come back out with a bra. Of course, we planted it and a gal was waiting for us. It always got a good laugh.”

Sight gags are still part of his shtick that includes his crazy hats. That all started when he spotted a guy wearing a cap with two beer cans on it. “I thought it was great fun. I saw him again; we had a few beers, and he gave it to me. It was a terrific thing to make people laugh and get them to talk to me. And then I began to look for other hats and I developed a collection, a lot are animated, total numbers over 300 today.”

In his late 70’s, Joe joined Veterans’ Outreach part time and helped veterans through fundraising.  He is known for coaxing large donations from perfect strangers. “I’ve been doing this for 20 years, now,” said Joe. “I’ve had 138 donations of $100 and one check for $500.” And what’s his secret? “I use humor and it works.”

He says he “reads” people as they approach his table to assess what kind of shtick he’ll use. “I’ll say to them, ‘I’ve been waiting for you all day. Would you like to make a $5 donation? That would sure make my day. Deal or no deal?’  I may decide to ask for $100. If I can make them laugh in the process, that usually means they’ll give a donation of some kind.”

Joe works in the Columbus, Ohio area where he lives with his wife, Mary.

“He really puts his heart and soul into it, that’s for sure,” said Mary. “He really enjoys what he’s doing because it’s all for the vets.”

Joe celebrated his 99th Birthday at the American Legion Post 532. The Legion and Veterans’ Outreach sponsored the event.  A big 10’ banner, a great buffet of food, and most exciting, his old band got together to play their hearts out for JOE!

Bernie, the commander, announced that Joe Is a Life Member and has been a member for 49 years…meaning he joined when he was an old 50 years of age!!!

Crazy Joe has decided to come out of retirement to help veterans, once again. We retired him at 97 when the pandemic broke out!  Now…he is back, at his request!  Raising funds for veterans in need, again! I bet not too many folks can say that! 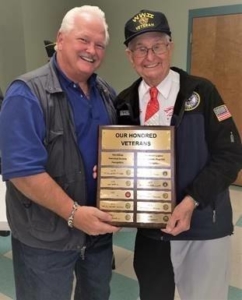 “Raising funds for our veterans is no laughing matter”, says Crazy Joe.

Joe’s daily goal when he goes out into the public: “Every day when I go out in the public, I want to make at least 10 people to laugh or smile!”

That’s his secret to long life, thanks Joe!

SADDLE UP FOR SOLDIERS EVENT IS GREAT SUCCESS
Scroll to top