Veterans’ Outreach on Belgrade Avenue in Liberty gives out boxes of food to veterans from 10:30 a.m. to 2:30 p.m. every Monday, Tuesday and Wednesday

Veterans’ Outreach on Belgrade Avenue in Liberty gives out boxes of food to veterans from 10:30 a.m. to 2:30 p.m. every Monday, Tuesday and Wednesday.

The organization is able to supply food to about 200 veterans each week, thanks to help from Gleaners Food Bank.

At the height of the pandemic, the Outreach was closed for about a month.

Services Director Robert Julian said they didn’t see much of an increase once they reopened in May, but now they’re seeing more people in need of food.

“We didn’t see any large increase, but we did see an increase after you know, everybody started going back to work,” Julian said.

Veterans’ Outreach is also able to help veterans by appointment with other needs such as utility assistance, gas and food cards.

A Great Milestone for about anyone. Joe Lavinger, A WWII Veteran, was at the Normandy Invasion. He was helping to clear the mines in a mine sweeper called the USS Steady.

After the War, he became a comedian and had his own band for 57 years. After that career…he wanted to help the veterans in need.So he joined, Veterans’ Outreach, for 2 decades raising funds for the Mission and bringing an awareness to those vets impacted by war!

Joe raised a quarter of a million dollars…over 20 years, and his claim to fame, then was receiving donations of $100 dollar bills from passionate Americans! He has 136 of them to his credit!

He is married to Mary for 46 years and they are both from Bethlehem…which he uses in his Jokes! American Legion Post 532 in Columbus hosted the party for their eldest member. Bernie, the commander, had advertised and had lots of food, Music, and Birthday wishes for Joe, whom also was voted vet of the year last November.

Joe is an inspiration to us all. His goal is to help as many vets that he can and meet 10 strangers a day that he can make smile or laugh at one of his hilarious jokes and/or antics.

We need a lot more “Crazy” JOE’S in this world…don’t we!

Check out Joe’s charity at veteransoutreach.org

Your fellow Veterans and Veterans’ Outreach, thank you for your services from the bottoms of our hearts! 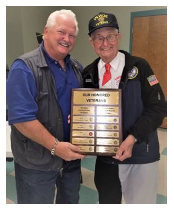 Today we want to share a “Case of the Week” from our corporate office located just north of Youngstown Ohio in Liberty Township.

A veteran came to us with a problem getting to work “legally”.  His exhaust pipe had fallen off, his vehicle was very loud and part of it was still hanging on, but very low.  He knew he’d be pulled over if he tried to go to work.  We were able to get it fixed at a local muffler shop the same day.  All is well with our veteran, now that he can get to work and take care of himself and his family.  The ripples that can happen from one small act of kindness. . .

Today, we would like to share a “Case of the Week” from our corporate office located north of Youngstown, Ohio in Liberty Township.

A female veteran went to Columbus Ohio for the promise of some part time employment.  She also planned to help out with some family situations.  Well, neither of her plans worked out, she called Veterans’ Outreach to get help getting back to her home in Youngstown.  She was desperate for a bus ticket.  We were very quickly able to provide her with a bus ticket home.

Today, we would like to share a “Case of the Week” from our corporate office located north of Youngstown, Ohio in Liberty Township.

A veteran that suffers from back pain and trauma has had to undergo many surgeries.  Sadly, he contracted the Covid 19 virus and was ill for several months.  His gas bill had fallen way behind.  We were able to stave off the inevitable disconnect by paying his bill.

Today, we’d like to share a “Case of the Week” from our Hartselle Alabama office.
Recently we helped a veteran that had fallen on hard times, he had been very ill and had fallen behind on his bills. The power company was going to cut his power off the next day.  We called the power company and promised payment, so he could keep his electric on. Case not closed, that weekend the news ran a story about that same power company that announced they had money available to give to customers to help with their bills. We called him and told him about it, that he should seek help from them too.  One of those times that “being in the right place at the right time” really helped out.