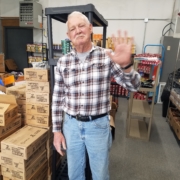 The Grayson Kentucky office team has been wanting to move things around to better utilize the available space to serve our veterans but haven’t had enough help to make it happen.  There are many sets of shelving and dozens of cases of food that needed moved, unpacked, and organized.

That’s when local veterans and volunteers stepped in to make a difference.  Now, the space is more spread out and easy to navigate.  This will enable the team to stand ready to meet the food insecurity needs of veterans in our neighborhoods. 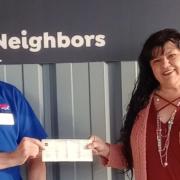 Save A Lot in Grayson Kentucky donated $500 to our Grayson office.  They also donated shopping carts for the food pantry which will help us move things around so much more efficiently.  They have been actively supporting our mission to respectfully serve and honor all veterans for a long time.  Their support has enabled us to stand ready to meet the needs of veterans in our neighborhoods.

We are so very grateful for the opportunity to be the conduit for the community to reach veterans in need.

Fellow Americans, like you, we are shocked and disillusioned by a single man’s power and evil brutality.  The sheer immensity of what is happening in Ukraine is more than I would have thought could happen in modern day.  The idea that one man can rally millions of people to march into their neighbor’s land, even their brothers and sisters land, just doesn’t even seem realistic.  “Misinformation” is a buzz word here in our homeland, but there it is the “root cause” of the situation unfolding before us on our many screened devices.   What we are witnessing, from the Russian people’s point of view, is what they believed was saving their brothers and sisters from inhumane treatment – I feel sure that many have been watching the situation from the worlds’ view and are certainly questioning the motivation of the march into Ukraine.  Imagine how they must feel when they learn the truth!!

From Ukraine’s view, people like you and I were just living their lives, going to work, raising their children, and enjoying freedom.  We all saw the escalation along the border, but they didn’t think it would really happen and now there they are.  Their entire lives gone, people are dying, they have lost their homes, their jobs, and everything they ever worked for.  More than a million are displaced refugees that just a couple of weeks ago were responsible working citizens of a free nation.  Millions more are hiding in subway tunnels and basements not knowing what will happen next.  They are led and inspired by Volodymyr Zelenskyy, a man who was once an actor and comedian.  He and a team from a television production company started the political party “Servant of the People”.  In just a few months, Zelenskyy was able to unseat the incumbent President of Ukraine.  His recent quote “I need ammunition, not a ride!” embodies his dedication and love of his people.

Furthermore, my heart aches for the once proud Russian people. This evil in their midst needs to be dealt with by them, especially. The one Russian Grandmother cried out, “Now I am a murderer, too!

This is all surreal, but the world’s leaders must step up and stop the madness.  When we elect people to power, we need to really search their character to decide who can lead when crises happen.  The US, and the other countries of the world, need to boycott those companies that still deal with Russia.

Our military, and its position in the world should be on the mind of all of us.  Can you now fathom the incredible importance of our men and women in uniform?  If not for our military might and self-sacrificing soldiers, we would not be the nation we are today.  We need to keep our soldiers on the forefront of our thoughts and prayers. Remember to never stop thanking them for our freedom.

As I grow older, I think more and more about what I will be able to leave behind.  We will all leave a legacy of some type, what will yours be?  What will Putin’s be?  What will Zelenskyy’s be?  Most of us won’t have our names in the history books, but Putin and Zelenskyy will – that has power and everlasting meaning.

May God bless America, our men, and women in uniform, and may God bless the efforts of the Ukrainian and the Russian people to keep their countries and cultures alive. 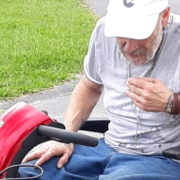 A generous supporter had donated a mobility scooter; however, we could not get it to be operational.  Several different people looked at it and just couldn’t get it to move even one inch.  One day a disabled veteran came by to get a box of food.  He sat down on the chair, and he immediately had it moving!  We felt that God had intended that chair for him.   We had it for a couple of months, and no one could figure it out.   We are so grateful that we can experience these great moments to help veterans and really improve their lives.  This veteran had no means of getting around on his own and now has regained some independence. 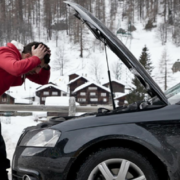 A veteran came to see our Services Director, Bob Julian because he needed help with getting to work.  His vehicle was broken down and really needed more repairs than the vehicle was worth.  His work was not near a bus line.

Earlier that same day, a veteran that Veterans’ Outreach had gifted an operational car to had given it back.  He said that his health and other situations made it impossible for him to maintain the vehicle.  The timing was perfect.  We were able to gift a car to this veteran in a dire situation, about to lose his job.

As a side note, the man that donated the vehicle to Veterans’ Outreach in the first place is a veteran too.