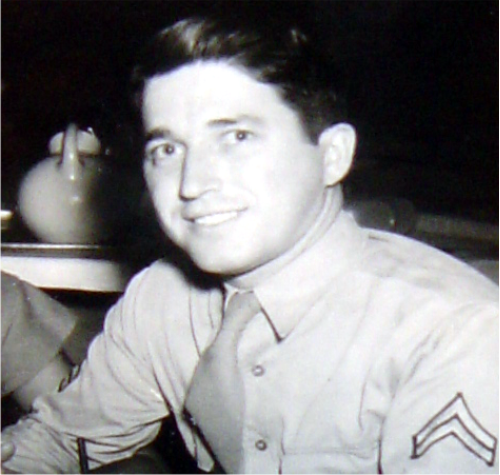 William Gordon Ely was born in Gallipolis, Ohio where he worked on the family farm when he was just 8 years old…even driving a tractor! One day he was on a bicycle riding on his country road when a couple of men waived him down in their Model T! The men introduced themselves as Mr. Ford and Mr. Firestone! They were lost and asked for directions to Columbus! William (Bill) didn’t know who the men were until later. He was born with a photographic memory as well and thought that they were dressed pretty nice!
Dad’s brush with history didn’t stop there…He later fared the DEPRESSION with his family, though he lost his big brother John to a drowning accident, he joined the service at 17…lying about his age!
He was finally stationed at Pearl Harbor after touring the South Pacific and wrote to his mom that he found Paradise, He was even bragging about catching a 40-pound octopus and having a barbecue with the guys out on the beach!
Just before 8 AM on December 7, 1941, my DAD, Bill, was on the porch of the barracks because of an upset stomach from cucumber salad the night before, which saved his life! The airfields were the first attacked and over 200 men were lost there. Bill was a Paramedic so he was racing off in his ambulance truck just trying to get away from the Zeros which were strafing him to the left and right of him. The attack lasted a total of 90 minutes and left 2,400 dead and 1,100 wounded.
My dad tended to as many wounded as he could while he was wounded as well. One critically wounded man my dad administered blood and glucose constantly, who was badly burned. He would change his bandages and he even would sleep with the man to keep him warm so as he wouldn’t go into shock. That man’s mom wrote a letter to my dad thanking him for saving her son’s life after he came home to further his recovery. The Letter was shown to the Red Cross and they started a Blood Drive using the importance of that story.
My DAD went on to be a founder of the “Pearl Harbor Survivors” Columbus Chapter, and co-founder of 8 other chapters. He left in his will a major donation to the MOTT’S Military Museum to help with the expansion of the new wing where his Pearl Harbor Coat/Memorabilia is on display and was constantly petitioning the state to rename Highway 75 to the Pearl Harbor Memorial Highway!
My DAD, William Gordon Ely, lived his life serving and honoring his country…his fellow man! “Lest We Forget”! Dad… you are part of HISTORY!
https://veteransoutreach.org/wp-content/uploads/2016/07/gold_star.png 63 63 Becky Bertuzzi https://veteransoutreach.org/wp-content/uploads/2022/01/Veterans-Outreach-Horizontal-3.png Becky Bertuzzi2018-05-28 11:19:522018-05-28 11:19:52Remembering My Father Today: A Pearl Harbor Survivor

Right Place at the Right Time
Scroll to top