“Home Free – A Tribute to the American Veteran” is a great dedication to all veterans and to what we were given in these United states of America by their sacrifices. This compilation of patriotic songs was written and performed by true freedom loving artists dedicated to the message of thanks and heartfelt respect to all veterans. The songs create a patriotic salute to the soldiers who have preserved our freedoms.

Veterans’ Outreach charity is 27 years old, I had the idea 21 years ago of developing a collection of songs that could help with fundraising and stir up patriotism.

I advertised for musical artists to send me auditions of their favorite patriotic tunes. I got a wide variety such as an elementary school bands’ rendition of “Oh Beautiful”, and “The Star-Spangled Banner” played in a bathroom by way of a tuba! Well, that was getting me nowhere, fast. So, I figured to try Nashville in a magazine called “Music Row”.  I received over 200 auditions…I was ecstatic.  I was getting offerings from well-known artists like Alabama, Oak Ridge Boys, Lee Greenwood, Kenny Rogers, and the like.

One artist Rick Lance, who is a veteran, took a particular interest in the campaign when he offered his song “Sarge”. It’s a fantastic tribute to veterans.  Rick brought allot to the table, everything we needed to get the job done!  Rick is a professional photographer with a design background.  He contacted other artists and coordinated deals. He offered, on our behalf, a thousand dollars paid to the artist/song writer for each song used for the collection of music.

Most of the artists donated their creation for the patriotic music collection. Things were moving along well. We came up with the name “American Pride”.  The art was being done for that title then suddenly, our world was rocked by the events of 9/11.  After a while, Rick pointed out that our chosen title was being used by many other markets and we would look like copycats. So, he thought the title should change to something like, “Home Free: A Tribute to the American Veteran”.

Bob Corbin, one of the artists jumped in to help finish the music collection! Bob Corbin is a song writer and vocalist in his group, “The Corbin Hanner Band”, from Pittsburgh. Their song contribution was, “Son of America”! I met with Corbin Hanner and Corbin jumped in with both feet plus he managed a group that toured with Kenny Rogers, “The Chandler Sisters”.  The first identical triplets that I ever saw! I wasn’t having double takes, but triple takes?  I remember looking at their hands and tried to remember their names by seeing what jewelry they were wearing.

The studio was “The Sound Emporium” which was used by most every major artist and many movie scores. What an experience! The title song, “Home Free, was sung by platinum artist, T. Graham Brown. I remember watching T running into the studio and he walked past me, then he backed up and looked me square in the eye and asked, “Is this for the veterans?” I said, “Yes sir, T, it is! “He hurriedly replied, “Well that is why I am here, to help our vets!”

Several of the other well-known artists were contracted by Universal and we would have to use their duplication services to get access to those artists. Our patriotic music collection had twenty songs on it, but we had to scale it down due to the cost of production. So, we had to reboot and scale down to thirteen artists.

It turned out to be one of the most patriotic collaborations of all time. The songs are timeless and do indeed swell up our American spirit of freedom and love of God, family, and country.  Take a minute to check out and listen to the sound of Patriotism and what it means to all Americans.  If you listen closely, you may even have to fight back a tear or two.

Home Free – A Tribute to the American Veteran 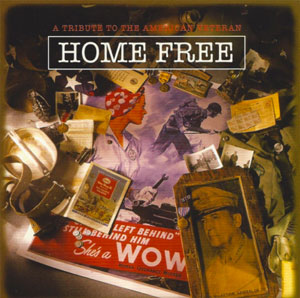