He started with the mission out of Columbus, Ohio in 2002 when he retired from a management career.  Columbus, Ohio is his birthplace, January 9th in 1937.  When he and his wife, Carol, decided to move closer to family in Alabama, he offered to develop the state by opening a full-service office to offer assistance to veterans. 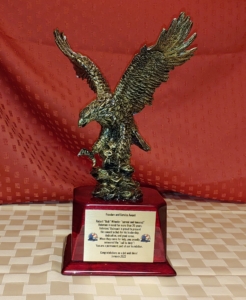 Bob has been passionate and worked tirelessly to help veterans in need.  He found a good location in Decatur for our first office in Alabama and wasted no time in getting the mission in operation.  His wife, Carol, came on board to manage the office.  Carol had been very quiet in early meetings with Veterans’ Outreach, but after she got involved, she has become the heartbeat of that office.   She has even visited homeless veterans living under bridges in an effort to lend a helping hand.

After a few years of getting established, Bob said that he was tired of paying rent and was going to find a building to purchase for the permanent home of Veterans’ Outreach in Alabama.  Bob has proven himself to Veterans’ Outreach many times and this wasn’t any different.  He found a great location with a couple of acres in Hartselle Alabama.

While Bob was at home one evening, he suffered a bad heart attack.  He had to have a quadruple by-pass.  Before the operation, John Ely visited him from the corporate office.   John was pleased that Bob was in good spirits and anxious to get “fixed up” and get back to work. John could tell that Bob was on some strong relaxers for he was strangely laughing out loud at silly things!

So, he took the opportunity to ask Bob a question that he had asked several times before and Bob’s answer was always “If I tell ya’, I will have to kill ya’!”   With the passage of time, even military operations get declassified, and John took the chance during that hospital visit to ask him that question again.

“Well Bob, I can’t remember what you did while you were in the military?” Bob looked up at the ceiling and said that he was in the Navy, on the USS Sampson, in the Intelligence Division.  Have you heard of the “Bay of Pigs?”  He said that he figured it was all declassified since it had been more than fifty years ago.

John said that he had of course heard of the Bay of Pigs and the Cuban Missile Crisis.  Bob explained that he was on the Sampson during the blockade and was on a secret mission to topple Castro’s regime. They had trained Cuban exiles in Guerilla warfare.  Bob lifted his eyes and shook his head, he said it didn’t go well, those men were either killed or captured.  The mission was a huge failure that took just two days to unfold.

That was a long time ago, Bob has spent his life living, loving, and caring for others.  His service as a young man made that unbreakable connection to the men and women that serve so selflessly in the United States Armed Forces.

At the age of 85, his work has come full circle, and he must retire due to health concerns.

Carol has picked up the reins and will continue to help Alabama’s veterans.

We honor Robert Wheeler with this Freedom and Service Award; and we thank him for his unselfish dedication to the mission of helping veterans in need.

The Bay of Pigs | JFK Library