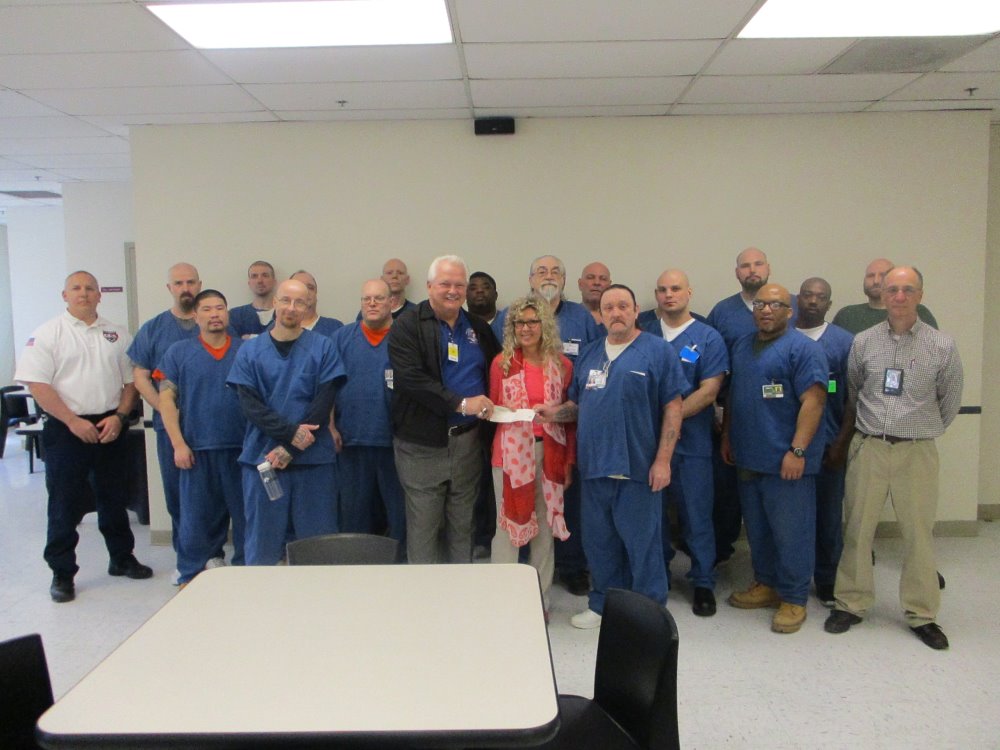 FREEDOM!
DO YOU REALLY KNOW WHAT THAT MEANS?
Many Americans take their freedom for granted. We have been well protected by our great nation’s armed forces that we so often don’t even realize just how blessed we are to be in these UNITED STATES OF AMERICA.
This week’s Case of the Week will help you to better understand the value of freedom, defined as “not being imprisoned, independence, self-determination . . .”
Local Prison Helps Veterans’ Outreach with DONATION
Most of us can only imagine what it would be like to end up in PRISON…not jail…but PRISON! I think of a place that is dark, dungy, cruel, and dangerous like Sing Sing, Alcatraz, Folsom, and San Quentin. You hear those names in song, movies, and books all of the time.
So, with those images in mind, I’d like to share a recent experience we had. A local prison’s Recreational Coordinator reached out to us via our website. The North East Ohio Correctional Center (NEOCC) of Youngstown, was interested in making a donation to our organization. The recently formed Inmate Veterans Group holds fundraisers during the year and wanted to make Veterans’ Outreach their organization to donate the proceeds to.
I had no idea that inmates had fundraisers. We were invited to the prison to meet the group and accept their first donation. It is a MEDIUM Security Prison with a capacity of 2,100 inmates! The visit was scheduled late in April 2018. We didn’t know what to expect, but were grateful to be chosen and interested in learning more about the group.
We arrived a little early, had no idea of how to enter, what gate to try, and so on. We saw some others entering and just sort of followed. After entering a couple of gates, we went through the security check point where we even had to leave our phones and smart watches behind! We were impressed with the level of security protocols, and the politeness of everyone.
We were cordially met by Mr. Colucci, the Recreation Coordinator. He led us through a couple more halls/doors until we ended up in a room with about 20 people in it. It was what I would call a visiting room. The inmates were dressed in blue scrubs and were sitting around the room at various tables. Mr. Colucci and Counselor Silvernail introduced us and then asked us to tell everyone about Veterans’ Outreach.
After we talked about how we help veterans in need, we fielded some questions. I have to say that the group was very respectful and interested in what we had to say. Not at all what we would have imagined.
One of the questions was, “How can we further help your charity?” I said, “Well…we always can use some volunteers!”
Then everyone put their hands up waving in the air and one of the officials said that I am sure that you can get another 2,000 volunteers from here if they were allowed!!! We had allot of chuckling over my offering!
Some of the inmates said that they would like to keep on helping whatever way they could. Their time in there can be best used in helping others, especially the vets. We learned that some of the inmate group are very artistic and were trying to think of ways to use that talent to benefit local veterans. We discussed briefly a plan where they could create items that could be sold for additional donations to continue the MISSION. It would be a way for them to give more of themselves to the community’s veterans!
The check that was presented was for $666 and some odd change…! I asked, “Couldn’t you add a few cents to get it to $667?” He thought about it, but that wouldn’t be fair! We had a couple of photos taken.
We met with the Warden, Mr. LaRose, an ARMY Veteran. He is a great individual with a good grasp on the humanity that he was responsible for. Firm, fair, compassionate, but ready for anything is the way we perceived him.
It was a bittersweet experience, looking at those men, not knowing what they had done to be there now, but also realizing that they made a series of poor choices that led to life behind bars. You don’t quite get what that means until you see it for yourself and we were only there for a short time.
I think that young people should be required to visit a prison, talk with inmates, and really get an idea of just what it means to be incarcerated! I think it would yield a smaller population in the prisons. Perhaps they would place a higher value on FREEDOM, paid for by our nations armed forces.
We would like to add that the prison was spotless and all of the inmates and the employees were cordial and ingratiating. We especially applaud Mr. Colucci and Counselor Silvernail for reaching out to us and allowing us to be a conduit of veterans helping veterans, even in this type of circumstance.
They are already planning the next event, to be held in August of this year.
John Ely, President of Veterans’ Outreach
https://veteransoutreach.org/wp-content/uploads/2016/07/gold_star.png 63 63 Becky Bertuzzi https://veteransoutreach.org/wp-content/uploads/2022/01/Veterans-Outreach-Horizontal-3.png Becky Bertuzzi2018-07-03 08:28:482018-07-03 08:28:48Local Prison Helps Veterans’ Outreach with Donation.

A Hug from the Heart
Scroll to top